One of our own?

When fanatics kill others in the name of their “beliefs” those beliefs are usually religious, sometimes political or territorial, sometimes all of the above and the one thing atheists have always been able to say about themselves is that nobody has ever killed in the name of atheism. This hasn’t stopped others trying to pin the crimes of Stalin Mau and Pol Pot on atheism but these charges are specious, a-historical and deny those dictator’s totalitarianism as sufficient motive. Which is why the horrific shooting of three young Muslims by self-avowed atheist Craig Hicks is causing such consternation and debate among the atheist community. 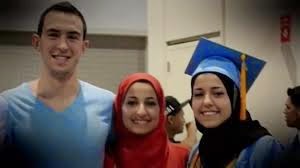 Deah Barakat, his wife Yusor Abu-Salha and her sister Razan Abu-Salha were gunned down last Tuesday in a condo about two miles from the University of North Carolina in Chapel Hill

There have also been questions over whether Hicks' anti-religious stance - which he freely shared on social media - had also been a factor in the murders.
On a Facebook page in his name, Hicks shared a number of anti-religion posts. A banner about 'anti-theism' is prominent on his page.
Hicks posted a photo from United Atheists of America on February 8, which has the title 'why radical Christians and radical Muslims are so opposed to each others' influence when they agree about so many ideological issues'.

His Facebook page would not have raised any red flags to atheists active on social media and I have expressed such sentiments myself and shared similar articles to provoke discussion or sometimes just to provoke. In fact I would say his online presence is much like any other activist atheist, with possibly a tad more anti-theist sentiment than those I engage with personally, so it’s not possible for any atheist who would hope to distance themselves from Hicks to make ”no true atheist” arguments.
There are however aspects of Hicks’ behaviour that are less than savoury; he was a multiple firearms owner who obsessed about the parking around his condo and was frequently threatening to neighbours who transgressed the rules.


Neighbors, as well as tow-truck driver and others, have said Hicks often complained about residents and visitors at Finley Forest parking in his reserved space. He called one tow truck company so often they stopped responding to his calls.

So far the local police are treating this as a killing over a parking dispute and if the victims had not been conspicuously Muslim that is probably where the speculation would have ended. But the execution like nature of this atrocity, three individuals murdered each with a bullet in the head, plus their race and religion makes it at least possible that this was a hate crime; the victim’s family certainly think so.


Yusor and Razan’s brother, Yusef Abu-Salha, also told RT last week that there had been a lot of tension between his sisters and Hicks.
“There were plenty of run-ins [with Hicks],” he said, “but the run-ins escalated when my sister moved in; she obviously wore the head scarf. I recall her telling me when she first went to visit the condo before she even moved in together, [Hicks] came and knocked on the door and told them they were making too much noise, and he brandished a gun at his waist.” “I consider that terror,” he added, “I consider that hate.”

Also there is no doubt that if Hicks had been Muslim and the victims white Christians the media would have been all over this as a hate crime or even terrorism; Islam would have been cited, links to ISIS or Al-Qaeda sought and security heightened. But, even in a country where atheists are routinely demonised, so far the only people really asking whether atheism is a factor here are atheists themselves.
That we are doing so is I think to our credit. Although there are hyper-sceptical voices claiming his atheism is no more relevant than his hair colour others are suggesting that as a movement we should focus on atheism’s moral dimension more


There’s nothing wrong with being against religion. But how could anyone absorb that part of our message and completely miss the part about how it makes our common humanity infinitely more precious? Many nonbelievers, including me, have written about how atheism makes life more valuable, not less. But are we not highlighting the moral dimension of atheism enough? Are we not doing enough to make it clear that we think and act as we do because we love the good? Have we not emphasized strongly enough that criticizing religion’s inhumanities is shallow and meaningless if we don’t hold ourselves to a better standard? Those are the questions that I think atheists should be asking ourselves in the wake of this horrific crime.

If atheism turns out to be Hick’s motivation this will be a rare and possibly unique event; Christians being far more likely to commit this sort of crime in the U.S . However that does not mean atheists can write him off as mentally ill (a discriminatory excuse in any case) or not one of us. Up until this event he looked from the outside to be fairly representative of a good number of atheists who mock religion without contemplating ethical alternatives, so if atheists in general and movement atheism in particular condemn yet disown him it will be as disingenuous as Muslims pretending ISIS are not Muslim.
Posted by Steve Bowen on Tuesday, February 24, 2015