Over the past week or so there has been a rash of stories from diverse countries involving the non-crime of blasphemy.
Some of these are extremely worrying and serious, if to be expected, like the arrest of four atheist bloggers in Bangladesh, putatively at the behest of a mob of Islamic fundamentalists. Others like the conviction of Turkish pianist Fazil Say for tweeting against Islam, and the backing by Russia of a harsher anti-blasphemy law following the Pussy Riot protest may have political rather than religious motivations behind them. 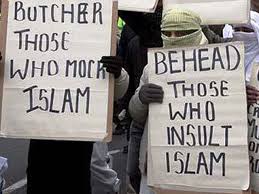 But regardless, this trend towards using the law to defend religious sensibilities is one that needs monitoring and combating wherever it manifests itself. Blasphemy is an insidious concept that seeks to protect ideas from criticism under the cloak of protecting the feelings of the believers that cherish them. Sometimes this is overt as the law may actually be worded as “offending religious sensibilities” rather than blasphemy per se so framing it as a crime against persons rather than a deity or a religion, but is really a way to prevent the claims and consequences of those religions from being scrutinised.
The idea that religion is a special case, and therefore should be respected whatever, is of course not new. Even when blasphemy isn’t actually illegal in a society it is often socially unacceptable to criticise or ridicule religious beliefs or practices and those who break the taboo are often defamed as shrill, strident or divisive for doing so. You only have to see the invective that people like Richard Dawkins, Sam Harris and the late Christopher Hitchens can attract to realise how precious some aspects of society can be about religious conviction.
The problem with this is that although a polite toleration of religious, and indeed political, thought may be fair enough around the dinner table to preserve an equitable atmosphere, once out in the wider marketplace of ideas the inability to criticise religion’s assumptions about what is the right way to order a society can quickly stifle debate and give religion’s more egregious consequences a free pass. It can also be used as a cover for supressing political dissent, which I suspect is the real reason Vladimir Putin is so in favour of such laws.
It is a fact that many of the world’s pressing political and social justice issues are framed in a religious context; from gender equality to planned parenthood, education for middle eastern girls to FGM and Burqas, cast discrimination in India, stem cell research, science education, even climate change and the environment, the religious of all stripes have a stake in the agenda. Regardless of where one stands personally on these issues it cannot be healthy if one side of the debate is stifled by laws that prevent the religious basis of argument to be challenged. If a politician or other opinion maker is motivated by her opinion that the world should be so because Allah or Yahweh decrees it, we should all be free to challenge the premise. If not we are living in a theocracy despite what our countries’ constitutions may suggest
I’ve said it before but it bears repeating that respecting an individual’s right to a belief does not entail respecting the belief itself. However people can often be offended (or at any rate claim offence) when their beliefs are even mildly criticised, which is what makes blasphemy laws dangerous as religion is particularly sensitive in this respect. This is not to say that religion should be excluded from social debate but it should not occupy a privileged position supported by laws (or conventions) that protect it.


Dear Sir, I am writing to protest the arrest of Asif Mohiuddin, Rasel Parvez, Mushiur Rahman Biplob, and Subrata Adhikhari Shuvo on charges of blasphemy against Islam. No civilised country can hold its head high in the international community while denying freedom of expression to its citizens and unreasonably protecting religious or political ideas from criticism or dissent. I urge you to put pressure within your government to ensure these atheist bloggers are not only released but assured safety from the ignorant baying mobs that will surely pursue them. Rest assured that the greater worldwide secular movements will continue to point at Bangladesh and shame your government if this vile blasphemy law continues to be used to supress the perfectly reasonable opinion that there are no gods. Not only does the existence of such a law demean your country, your government and your people, it also demeans the religion of Islam which is obviously so insecure in its own beliefs that it cannot stand dissent or critique. Suppression of free speech on the internet is in any event a futile exercise as there will always be people, like me, to take up the cause for secularism and the right to criticise religion from within those countries that are sufficiently mature to have abandoned such medieval notions as blasphemy. So once again I call on your country to release and protect Asif Mohiuddin, Rasel Parvez, Mushiur Rahman Biplob, and Subrata Adhikhari Shuvo. The world is watching.. Yours Sincerely

I have yet to receive a reply or an acknowledgment of this letter, which is disappointing, but allowing this sort of thing to go unremarked is to perpetuate the idea that blasphemy is a real crime that can merit a civil punishment. Secularists all over the world are also penning similar missives to their respective ambassadors so I can only hope some good will come from this
Although we have come to expect Islamic countries to incorporate blasphemy in their legal system it is worth remembering that it was only in 2008 that laws for this “offense” were repealed in the UK and we need to watch out for well-meaning but misguided people who would see them back.
Posted by Steve Bowen on Tuesday, April 16, 2013 3 comments: