Thoughts on my own moral philosophy. 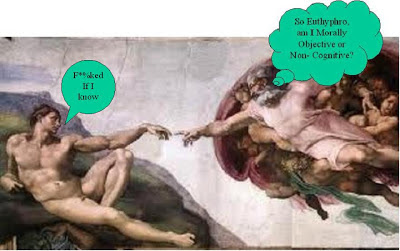 Well I blame ‘D’ over at She Who Chatters. It’s been a long while since I tried to unravel my own position on moral philosophy, but good old ‘D’ had to open that convoluted can of worms with her latest post (go read it, and all her others too).
So! The first thing I can say with some degree of certainty is that I am a moral anti-realist. I know this for two reasons: 1, someone cleverer than me told me I was and 2, I read up on anti-realism and wiki-walked my way through a few related definitions and found it corresponds with my belief that there are no moral absolutes, no eternal moral truths we can pluck from the ether to be a yardstick (meterstick?) to measure our own morality by and definitely no god given rule book.
Having decided there is no Platonic perfect morality to draw on, another problem presents itself: Does any moral position have a basis in reality? This is essentially a choice between Cognitivism and Non-Cognitivism. Cognitivism holds that moral statements (propositions) can be demonstrably true or false, for example “stealing is wrong” carries the same veritas as “London buses are red”. At first glance this might look as though Cognitivism requires moral realism, but it would in fact be just as correct to say that “stealing is wrong” is a false statement. (The anti-realist position known as Error Theory states that all moral propositions are false). Nevertheless, my own position is that of Non-Cognitivism, which says that moral propositions are neither true nor false but are expressions of opinion (“stealing is wrong” is equivalent to “I believe stealing is wrong” or “Boo to stealing”).
However, many moral propositions while not what a proper philosopher would call ‘truth apt’ do have a high degree of ‘truthiness’ that endows them with a visceral certainty that makes them feel like the basis of an objective morality. This is particularly so of those moral positions that are often considered universals such as murder is wrong, stealing is wrong, cheating is wrong and the like. One would be hard pushed to find anyone in any society that would disagree with those statements (even if they do in fact kill, steal and cheat), possibly because either cultural or biological evolution has encouraged our internalisation of these ethics as a consequence of being a social species. But there is nothing obvious on deeper dispassionate reflection that makes any of these normative ethics intrinsically true. These same gut instincts also tend to inform (or misinform) our beliefs about more contentious moral statements such as; “homosexuality is wrong”, “sex outside of marriage is wrong”, or “recreational drugs are bad”. These are deontological ethics handed down to us by society or (more usually) religion that are even more transparently subjective when actually thought about although often presented as moral givens.
If all morals are subjective, as I believe them to be, we are then left with the thorny issue of moral relativism. I am not a moral relativist and to be honest I don’t think I have ever met anyone who is. It is one thing to acknowledge that different societies and different times hold differing moral standards (descriptive moral relativism) and entirely another to state that it is inappropriate or impossible to judge one against the other (meta-ethical moral relativism). If the latter were true we would not be in a position to agree that slavery, which used to be morally acceptable, is a moral evil and always has been. We don’t tend to say of slave owning cultures “oh, they were just the product of their time”; rather, we judge them as barbarous and backward. In the same way I am not prepared to defend female genital mutilation in Somalia just because it is a cultural norm there. But in my anti-realist, non-cognitive subjectively moral world what basis do I have to deem such practices as immoral?
My answer, for what it’s worth, is that although morals are not objective, outcomes of actions often are. I am a consequentialist and a utilitarian who believes that it is possible to apply reason to moral dilemmas and point to a rational system of ethics which in principle could be agreed on by everyone, ascertaining the costs and benefits of a particular action to the actors involved and devising a course that causes the least aggregate harm or even the most possible good (by harm and good I am limiting these to the measurable, economic and corporeal). However this becomes problematic if a society sanctifies cultural and religious norms to the extent that a critical examination of the assumptions behind them is impossible, requiring reconciling a putative infinite “spiritual” harm against a limited physical good, which is why such societies are able to justify honour killings and the mutilation of children. By rejecting deontological morality I believe I am justified in condemning such actions and rejecting cultural relativism on rational and scientific grounds.
There is not enough space here to explore all the ramifications of this, but Adam Lee of Daylight Atheism whose philosophy of universal utilitarianism can be read >here< and in his book has articulated similar ideas. Also Sam Harris’ book The Moral Landscape offers a scientific route to a moral society.
The links on this page all point to reliable sources of information about moral philosophy, so dive in if you dare…
Posted by Steve Bowen on Tuesday, January 22, 2013 1 comment:

Feminism and the new atheist schism

One of the problems with self-defining as an atheist is that it is at root a very narrow definition of what a person actually stands for. It really tells the world nothing about you other than you do not believe in the existence of any gods and leaves all the other cultural and political questions hanging.

As a contrast if somebody identifies themselves as an Evangelical Christian it is a fair to assume of them certain attitudes about e.g. abortion, LGBT rights, gender equality etc. and to have grounds to probe their assumptions about evolution, climate change and political allegiances frequently associated with that religion. In other words the kind of religion you follow come with an amount of stereotypical baggage that atheism lacks.
On the face of it that is a good thing. After all, atheists by rejecting all religions are rejecting all the associated dogmas and, in theory at least, building a worldview from first principles. But, since this does not happen in a cultural vacuum and everyone’s life experiences are different the spectrum of political beliefs found amongst atheists is extremely broad.
When I first went in search of an online atheist community some five years ago, the main topics of conversation were around debunking religious apologetics, along with science, cosmology, evolution and a-biogenesis as they cropped up in arguments with (mainly) Christians in the comment sections. These are all “safe spaces” for atheists that give everyone a chance to debate and bait the theists for sport, while generally getting on with each other. But inevitably as the community and the conversation matured the blog posts and discussions moved into more contentious areas, specifically the abortion debate, feminism, racism and other social justice issues which, given the diversity of opinion in atheism was bound to stretch the consensus more than somewhat.
It became clear to regular atheist bloggers, commenters and their readers that atheists are as able to be conservative, sexist, racist, and climate change denialist as they are liberal, inclusive and green and although the prevailing zeitgeist was the latter a sizeable and vocal minority were not
So what happens when the atheist movement starts to debate its own credentials as an inclusive, non-sexist, non-racist movement? How does it react to those of its own who either do not see social justice issues as pertinent to the atheist agenda or who are antagonistic to the assumptions behind those issues?
Ever since the Elevatorgate scandal hit the atheist community back in 2011 a number of prominent atheists have been calling for conferences and events to have a clear and enforceable anti-harassment policy in place so that women and minorities can feel safe and participate on an equal footing with the predominantly white male crowd that these events attract. Personally, I see this as uncontroversial but it has flushed out a number of people who believe that being asked to behave respectfully and reasonably to others in a public forum is some kind of infringement on their rights to free speech. Their response has been to abuse bloggers like Jen McCreight Rebecca Watson and Ophelia Benson among others and accuse them of poisoning atheism with feminism.
What seems to have outraged these people is the suggestion that they may be unaware of their own privilege and possibly be just a little bit sexist themselves. Well I have news for them, they are and probably, so am I. In the same way that everyone’s a little bit racist everyone can be a little bit sexist too and we shouldn’t feel affronted when someone on the receiving end points it out to us.
Anyway, as a consequence of all this it has become almost impossible for those atheists who want to discuss diversity and inclusivity in the movement to do so on open forums due to the constant trolling and ad hominem invective from a particularly loud and obnoxious cabal of commenters and so was founded Atheism+ a forum for atheists who want to align their activism with other causes and marginalized groups. This seems to me to be perfectly reasonable because it leaves the ‘big tent’ of atheism open to all those who would speak out for Church / State separation and the superiority of science, reason and evidence over religion, superstition and dogma, while creating a sub space for those also concerned about the religious attacks on women’s and LGBTQ equality. Anyone not aligned with that agenda need not apply, (which is not being exclusive nor is it an invitation to ‘groupthink’ as we can still find plenty to disagree on about how to meet the social justice goals we aspire to). Besides, those against atheism+ now have their own “Slymepit” to play in.
But does this really represent a schism in the new atheist movement? Actually probably not because unlike religions atheism has no dogmas, not even feminism or LGBTQ rights or racial equality, because none of those things are an aspect of atheism per se albeit they are prevalent attitudes among atheists generally. Social justice is a society wide and global issue and is being addressed by many liberal theists as well as by atheists and all the while the atheist/secular movement is successfully working to counter religious extremism and its influence in governments worldwide the social justice agenda will advance whether all of us agree on the necessity or not.
Posted by Steve Bowen on Friday, January 11, 2013 No comments: