Is slavery "abhorrent" in Islam?

It's been a while since BBC's Thought for the Day has motivated me to blog about it, but a recent contribution (link above) by Sughra Ahmed, the current president of The Islamic Society of Britain was such a blatant example of scriptural cherry picking that I can’t let it pass without comment.
The piece was ostensibly about modern slavery, a very real problem that Prime Minister Theresa May has recently highlighted as a priority for national attention by setting up a cabinet task-force, and Ahmed opens with this thought


” Slavery is a phenomenon I think of as something from long ago and a history I’m ashamed of.”

I waited for the admission that many religions, including Islam, had condoned slavery and that would be the source of her “shame”. But no…


“Slavery has also been a challenge for religious traditions and we know this through the example of prophets and religious texts. Prophet Muhammad, for example, put himself at risk when he freed those who were enslaved by people of the time. It was commonplace for powerful men to own slaves, in fact it was seen as a sign of wealth and stature in their communities. The story of Muhammad freeing the slave Bilal is the most famous and was a clear demonstration to those of the time, and those who read the story today, that slavery is abhorrent in Islam.”

“Slavery is abhorrent in Islam…”. Really? Lets test this glib assertion, based as it is on one cherry picked story about the African slave Bilal Ibn Rabah against several other Quranic verses and Hadiths.


Quran (33:50) - "O Prophet! We have made lawful to thee thy wives to whom thou hast paid their dowers; and those (slaves) whom thy right hand possesses out of the prisoners of war whom Allah has assigned to thee"

Bukhari (52:255) -Volume 4, Book 52, Number 255: The Prophet said, "Three persons will get their reward twice. (One is) a person who has a slave girl and he educates her properly and teaches her good manners properly (without violence) and then manumits and marries her. Such a person will get a double reward. (Another is) a believer from the people of the scriptures who has been a true believer and then he believes in the Prophet (Muhammad). Such a person will get a double reward. (The third is) a slave who observes Allah's Rights and Obligations and is sincere to his master."

Bukhari Volume 3, Book 41, Number 598: Narrated Jabir: A man manumitted a slave and he had no other property than that, so the Prophet cancelled the manumission (and sold the slave for him). No'aim bin Al-Nahham bought the slave from him.

These and other examples can be found here .

The best you can say about Islam from a scriptural point of view is that it sees manumitting slaves as a nice thing to do that will likely get you brownie points with Allah (who,as we know, rewards good Muslim men with 72 perpetually virginal sex slaves in heaven) but it certainly doesn’t see it as a priority and by no means is slavery portrayed as “abhorrent”. Like the old testament a thousand years earlier the Quran accepts slavery as a normal part of the human condition and fundamentalists today are convinced they are justified in taking sex slaves from among their enemies.

It does no justice to the victims of modern slavery or any favour to Islam in the west to deny the reality of what scripture teaches. Both the Quran and the bible are flawed texts with little moral authority when read without eisegesis, cherry picking and fallacious appeal to historical context. In the same way they promote discrimination, misogyny and intolerance they condone slavery in clear unambiguous language and Sughra Ahmed’s broadcast seems more an exercise in propaganda for Islam than a genuine attempt to discuss the problem in the modern era.
Posted by Steve Bowen on Thursday, August 04, 2016 2 comments: 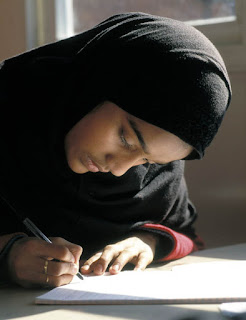