Religion as a Hypothesis 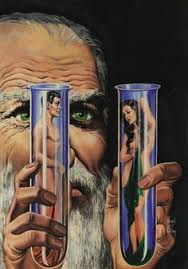 He doesn’t have a problem with the substantive intent of the quote, which is to point out that religion should not be privileged or protected from criticism, but disagrees with the specific premise that religion is a hypothesis. Like many philosophical debates a lot of this comes down to semantics. If Greta has said religion is a conjecture, an opinion or an idea about the world her intent would have still been clear and to the extent that hypothesis and even theory are used colloquially it seems to me to be largely uncontentious. However it is true that hypothesis has, within science at any rate, a specific meaning. The OED takes as its primary definition

and as such needs to be open to falsification. Also, it should be said that Greta does not say a hypothesis is all that makes up religion. In fact when asked her response was


"Sigh…I didn't say religions were ONLY a hypothesis. Yes, it has historical resonance, cultural importance, etc. The point is that the thing religions specifically center on -- namely, a belief in supernatural entities or forces with an effect on the natural world -- is a hypothesis. And yes, as such, this hypothesis should be able to be subjected to scrutiny and questioning just like any other, and should not be afforded any special respect or protection.”

So to what extent if any can religion be said to be a scientific hypothesis open to falsification and to what extent would religion retain relevance at all should any part of it be proved false? According to Rob religion cannot be falsified on its own terms.


”[…] I would say that religion is *not* an hypothesis (in the same way that *science* and philosophical naturalism are not hypotheses) as evidence cannot be adduced one way or the other. Furthermore, no one comes to religious belief by considering the so-called empirical claims of religion. All religions are self-contained metaphysical systems which resist in their own terms any falsification on empirical grounds.”

But do we have to accept religion on its own terms? True, if allowed to get away with their own apologetics religions immunise themselves against disproof. Christianity has had two thousand years of practice making God’s intent, ability and mode of operation in the world as inscrutable to investigation as possible and Islam built apophasis into itself from the outset but from an empirical point of view prayer (for example) either works at some statistical level of significance or it doesn’t. If it doesn’t we are entitled to conclude that either the deity it is aimed at doesn’t exist or at any rate does not perform as expected by the petitioner. Rob says


”In one of our FB exchanges you certainly said that issues like petitionary prayer and miracles are where religion intersects with the empirical and so provide us with the ability to evaluate religious claims. If prayer fails and there is no evidence for miracles then, if I understand you correctly, the whole edifice falls for all the assertions of religion are logically founded on the truth of the basic claims---like the claim that there is a supernatural being who is *causing* things to happen in the world.”

Here I think Rob is inferring too much. That we can say with a reasonable amount of certainty that miracles and prayer are un-evidenced is only to say that these particular claims of religion do not need to be taken seriously by non-believers. It does not prove that gods do not exist but may suggest the believer may be mistaken about the attitude of the particular god being petitioned. The hypothesis that gods can be swayed by prayer to intervene is falsified and that particular claim should rationally be rejected.
Whether the “whole edifice” of religion should fall based on this depends very much on the store individual believers put on particular claims. I agree that not everyone “comes to religious belief by considering the so-called empirical claims of religion” but some do surely. Does an adult converting either from a religion of birth or from previous agnosticism really ignore the supernatural premise behind their new belief? I doubt it.
For many believers religion is a heuristic device. Shorthand; for moral behaviour, cultural identity and normative values and for these people no amount of hypothesis testing is going to dent their faith, largely because from their point of view it’s irrelevant. But people do lose their religion after putting all their faith in unanswered prayer. They may still believe in a god: Just not one that cares about them.
If you spend a great deal of time, as both Rob and I do, thinking and reading about religion it is easy to become convinced that religious belief is typified by theologians who understand the sophistication and complexity it has evolved over the millennia but a short trawl through Christian blog sites, particularly those found in the US, should be enough to disabuse anyone of the notion that a significant number of the faithful aren’t literalists. This kind of belief is so specific and so rooted in empirically testable claims that to suggest it is not a hypothesis seems to me to be perverse. The six day creation, a global flood, the exodus from Egypt are all factual claims and have all been debunked by cosmology, geology and archaeology. None of that happened and the only way that this kind of belief can be maintained is by denying any agency to science at all which is what many do (while still using smartphones). If these people had to confront their cognitive dissonance by tackling their religion head on I doubt they would retreat into the “self-contained metaphysical system” of question begging that modern theology offers. They would have to abandon their religion wholesale which is why they rarely admit the scientific evidence.
So yes, religion is in part a hypothesis and can in part be falsified even if this depends on the particular truth claims of the specific religions and the extent to which these are held to be truths by individual believers. Religion and religious belief can transcend the empirical by substituting literalism for allegory and understanding ritual as culture not magic and to the extent that some have done this they are impervious to scientific enquiry, although how far they can do this and still be legitimately called a religion may be a discussion for another day.
Posted by Steve Bowen on Tuesday, November 24, 2015 No comments: