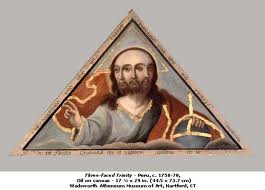 My ex-wife, for her sins, has recently entered the teaching profession and as an aside to her main subject is teaching classes in religious education. Recently she has been discussing the concept of The Trinity, the doctrine confirmed at the councils of Nicaea and Chalcedon which states that God the Father, God the Son and The Holy Spirit are one entity, individually coexistent, omniscient, omnipresent and omnipotent. It’s a bizarre and illogical concept that even theologians have difficulty explaining, even if they think they understand it.
As an exercise in illustrating the idea her class are asked to come up with an example of “three things in one” that go to make up a whole which, as I have contemplated the task, is a lot harder than it sounds. Coming up with a gestalt of three things is relatively easy and my best effort is a song; which comprises rhythm, melody and lyric as distinct elements that combine to make for one coherent auditory experience yet can also be experienced and understood separately. I am told the example often given to the pupils is a Mars bar (chocolate, nougat and caramel in one), but neither really addresses the concept of the Trinity satisfactorily, because for that each individual element must also be complete in its own right and not only represent, but be the whole.

The point is that God is God, Jesus is God, The Holy Spirit is God while all simultaneously being seperate individuals equal in all respects. In particular Jesus does not come ‘after’ God the Father as in the normal parent child scheme of things.
The reason why finding a meaningful metaphor for the Trinity is so hard is because it is, in reality, meaningless; an idea invented because the early church struggled to reconcile the necessary divinity of Christ with his status as a human being. Some of the earliest schisms in Christianity were over this exact issue with differing sects such as the Monophysites and the Arians which had Jesus as a fusion of mortal and divine in the first case and as subordinate to God in the second. The Nicene and Chalcedonian Councils were intended to put a stamp of orthodoxy on the nature of the relationship between God and Christ and this is the theological fix they came up with.
There is in fact very little biblical support for the idea of the Trinity. Genesis has references to God in the plural (Elohim), which some theologians claim as a Trinitarian reference but more likely reflects the polytheist nature of early Judaism. Later writings such as Isaiah portray God in firmly singular terms and the New Testament is similarly lacking in clear references.
What the early Church appears to have done is create a deity with multiple personality disorder purely for the expedient of avoiding accusations of polytheism (a charge which even so is laid by Muslims on Christianity) while allowing the simultaneous worship of Jesus and Yahweh.
Ultimately believers present the irrationality of the Trinity as a divine mystery that defies human understanding so we shouldn’t be surprised that explanations are hard to come by, but this of course is the hallmark of all religious apologetics; if it doesn’t appear to make sense it is just good old ineffable God and his funky mysterious ways bless him.
If a chocolate sweet can really represent the Trinity, it’s probably a Fudge.
Posted by Steve Bowen on Wednesday, October 31, 2012 No comments:

Democracy and the prisoner dilemma 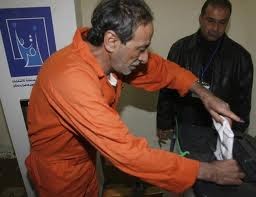 David Cameron has put his foot down over the European Court of Human Rights ruling that the U.K’s blanket ban on prisoners voting in elections should be revoked, stating in the House of Commons:


“No one should be under any doubt — prisoners are not getting the vote under this government,”

He has said before that the thought of prisoners voting makes him “physically sick” and there is no doubt that many on the right of the Conservative party have particularly strong views in this direction.
It is also true that the idea of ignoring the European Court is of itself attractive to the euro-sceptics and large sections of the public so his rhetoric may well be designed to strike a populist chord as well as being a genuine reflection of his views.
However, and this may be a contentious view to some, I think the antipathy to prisoners voting is fundamentally misguided and a misreading of the balance of rights and responsibilities in a democratic nation
To express disgust at the idea of convicted offenders voting is to ascribe the electoral franchise the status of a privilege, something that completely goes against the principle of universal suffrage. Voting was a privilege when only the landed gentry could participate, it was still a privilege when only men were allowed to do it. In a modern democracy the ability to have a say in who governs the society you live in is a universal right, which should not lightly be denied any adult citizen.
Obviously we do deny prisoners many rights, not least the right to liberty, but more than a right, exercising your franchise is a responsibility and in my opinion should be a moral obligation. Participating in the democratic process is a duty of citizenship and those people who do take the time and trouble to become informed, have opinions of whatever hue and then demonstrate that at the ballot box are engaging constructively with the future of the nation
It seems to me that the worst signal we can send to a felon, someone who by definition is either not engaged with society or is destructively opposed to it, is to tell them that they cannot be a part of the process that defines it.
Rather than deny these people the vote, many of whom have probably never bothered anyway, we should in fact insist that they do. Teach them civics, engage them in political debates, educate them in the democratic process and then put a ballot box in every prison and require them to use it.
Posted by Steve Bowen on Thursday, October 25, 2012 No comments: