Free speech in the balance

In a recent survey of 1000 British Muslims conducted on behalf of the BBC it was found that 80% of those asked found cartoon depictions of their Prophet Mohammed “deeply offensive”. Also a substantial minority (27%) thought that violent reprisals for such offense can be justified. A follow-up vox-pop on Radio 4’s Today program featured several Muslim voices from Bradford exclaiming they felt “extremely personally offended” by disrespect to their “beloved prophet” and if we take these statements at face value and allow that sentiment really does run so deep within British Islam we have got a real problem for liberal democracy in this country. 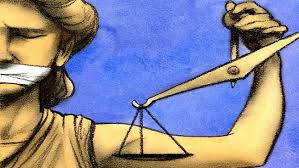 Difficult as it is for someone like me to empathise with personal distress over such abstract offenses as blasphemy and criticism of long dead self-styled “prophets” the fact that a substantial proportion of a growing minority feel that way is not to be ignored. These people are not just going to “get over themselves” any more than the clinically depressed can just “cheer up”. Reverence for Mohammed is integral to their upbringing and psychology and constantly reinforced within their ethnic and religious cultures; change, if any, will be generational and not to be expected short term. So is it up to us as a society to accommodate Muslim sensitivities and if so how can we do so without compromising freedom of expression?
It’s easy to forget that blasphemy was a crime in this country until 2008 and I for one have no desire to revert to any legal suppression of religious criticism. In any event such laws often come with unintended consequences and one person’s blasphemy is another’s sincerely held belief as the abuse of such laws in Pakistan against Christians there illustrates. Neither is it possible to legislate for offense generally as we are all occasionally offended by something.
In the normal way of things very few of us go out of our way to be deliberately offensive unless we feel we have good reason, one of which may be the imposition of another’s taboos in our own space. It is certainly not to be expected that a Christian, Jew, Hindu or atheist should respect Mohammed or any part of Islam that does not inform their own belief system. Islam and all it entails is an idea which in a free society we are entitled to reject and if within it we see inherent dangers we have an obligation, let alone the right, to be critical. When extremists insist that non-Muslims must not portray the prophet and back that injunction with threats of violence the only response is to do that very thing, which is why I fully supported “Everybody Draw Mohammed Day” and while it’s unfortunate that as collateral damage a large number of Muslims who may abhor violence are offended I see very few alternatives to this tactic. I don’t think I am unnecessarily victim blaming to suggest that the way for mainstream Islam to avoid Charlie Hebdo style provocation is to rein in their own extremists.
Should we have the freedom to indiscriminately ridicule religion in the public square? Here the answer is categorically yes, but whether we should routinely do so, except as a response to a threat to that freedom I think is a question of taste and good manners. Where I do think such ridicule is perfectly acceptable is in the arts, literature and in our private spaces including our own social media accounts. In order for people to be offended in these places they must be actively seeking offense by choosing to read that blog or book and watch that play or TV show or go to that exhibition. It’s not an imposition or discrimination to say to Muslims that if they don’t like this or that speech they should ignore it. We all avoid exposing our minds to ideas we find offensive and I regularly block social media feeds that I find distasteful due to racism or sexism even though I don’t believe it’s a particularly good thing to exist solely in a bubble of our own beliefs.
It’s a feature of all religions that their adherents demand respect for their beliefs and given the power and opportunity insist that everyone abides by their rules. It took a long time to tame Christianity in this country and put it into its proper place, subservient to law and in the private sphere (mostly). Islam is going to have to learn to occupy those same social spaces and be prepared to be offended on occasion. The more Islam becomes part of the fabric of Britain it will be measured by its ability to withstand satirical criticism; that is the trade-off for living in a democracy. Muslims have the right to protest and voice their anger if they think real boundaries are being crossed because they enjoy the same right to speech as everyone else. They have every right to point out the offense, but no right not to be offended.
Posted by Steve Bowen on Thursday, February 26, 2015