Synchronicity, coincidence and the myth of fate

Back in 2010 I wrote a post called The awesome power of a lunchtime prayer, about how a trivial bit of wishful thinking actually ‘came true’ at an automated checkout. It points out that the occasional random congruence of actual events with our desires is explanatory enough to account for the belief in intercessory prayer, as long as you only count the hits. However this unequal point scoring for coincidence is also the reason why some people are prone to reading meaning and significance into other experiences that in fact share no causal relationship whatsoever. 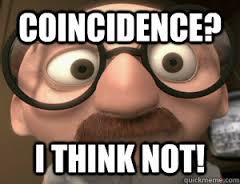 Random coincidences happen all the time. If one is not happening to you this minute there will almost certainly be one being noticed by one of earth’s other seven billion inhabitants. Or maybe you’re just not aware that the person sitting next to you on the train as you read this is a classicist who knows the answer to that tricky 39 down on the crossword you abandoned in favour of my blog (wishful thinking, see?). But whoever and wherever you are lots of these potential little miracles are happening more often than people think and it only takes a bit of context to fool ourselves into believing the fates are at work.
Imagine you are at a party when someone you’ve started talking to says their sister is a computer technician who does house calls in her spare time. This would be a bit of superfluous chat except that your Mac has just crashed and is out of warranty so you think “that’s handy” and take note of her number. Next day you call and arrange for her to fix your computer. She arrives bringing with her a friend who it transpires is a recruitment agent for a field in which you are experienced. Another minor coincidence but as it happens you are dissatisfied with your current job and mention you’d be interested in any opportunities. A week or so later as you work on your newly fixed Mac you receive an email from the agent inviting you to an interview for an interesting position which, when you attend, turns out to be for a company run by an old college friend with whom you’d lost contact. Some months later, now working successfully in your new job, you meet the romantic partner of your dreams by the water cooler. Now that’s fate surely, after all if you had never got talking at that party…
The fiction above is typical of anecdotes you will hear told by friends and acquaintances and while none of the events are by themselves particularly remarkable , seen as a retrospective narrative they acquire significance in the context of a story about how you met your partner. But as Tim Minchin puts it in If I didn’t have you…


I mean I reckon it's pretty likely that if, for example My first girlfriend, Jackie, hadn't dumped me After I kissed Winston's ex-girlfriend Neah at Steph's party back in 1993 Enough variables would probably have been altered by the absence of that event To have meant the advent of a tangential narrative in which we don't meet Which is to say there exists a theoretical hypothetical parallel life Where what is is not as it is and I am not your husband and you are not my wife

In other words any string of events can be put together in portentous retrospect if the desire for meaning is important enough to ignore all of the other possible events that could have led to an equally auspicious though different conclusion. 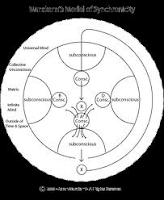 We are by nature a pattern seeking story-telling species prone to apophenia and sensitive to, what Carl Jung dubbed, synchronicity, added to which is the cultural suppositions for the existence of fate, Karma and theistic gods guiding aspects of our lives. So, perhaps we are uncomfortable with the fact that most events are chaotic and stochastic to such an extent that we cannot predict outcomes reliably. However, we can and frequently do confabulate post hoc explanations to satisfy our desire for reasons and meaning.
Posted by Steve Bowen on Tuesday, July 16, 2013 No comments: