O.K, It’s difficult to know if the language as expressed in this Telegraph story is actually Lord Carey’s or just the journalist’s interpretation. Either way it is a gross misrepresentation of the facts.
Former Archbishop of Canterbury George Carey has apparently made a direct appeal to the Court of Human rights in regard to two workers “forced out of their jobs” over the wearing of crosses and the case of Gary McFarlane, a counsellor sacked for saying that he “may not be comfortable” in giving sex therapy to homosexual couples.
For the record Nadia Eweida, an airline stewardess for BA was acting in direct contradiction of her airline's dress code, which forbids any visible jewellery being worn over the uniform. She was not “forced out” or suspended, she removed herself from the post for not being especially privileged due to her faith.
Similarly Helen Slatter a Hospital Nurse resigned, and was not “forced out” by the Devonshire Hospital where she worked, and which forbids all dangling jewellery because it is an infection source and also a potential choke hazard should a patient grab it.
Gary McFarlane refused to council gay couples, he didn’t just say he “may not be comfortable,” he refused to do the job he was employed to do in a non-discriminatory way, therefore he was dismissed.
I have no issue with these people seeking legal redress if they really believe they are being discriminated against, although needless to say in my opinion they aren’t. But, it is dishonest of the Telegraph, and perhaps Lord Carey if he is being quoted directly, to insinuate that such discrimination is religiously motivated. In fact someone is lying, and knowingly so, in order to present these people as victims of a more general oppression of Christians. Certainly this statement:

Lord Carey says worshippers are being “vilified” by the state, treated as “bigots” and sacked simply for expressing their beliefs.

Is a bit rich from someone who is a Lord, purely by being a Bishop of the Anglican Church: would that we were all so "vilified". As I have said before, being a bigot because you are religious does not make you any less of a bigot, if you don’t want to be treated as a bigot, don’t behave like one. And, as for people being “sacked simply for expressing their beliefs” this is just a lie: it hasn’t happened and Lord Carey and the Telegraph should be more respectful of the truth.
Posted by Steve Bowen on Monday, April 16, 2012 No comments:

Rowan Williams made a couple of interesting statements in his final Easter Sunday sermon before he stands down as Archbishop of Canterbury. Interesting but not perhaps for the reasons he thinks. The first is his plea that religious education does not become sidelined in schools. 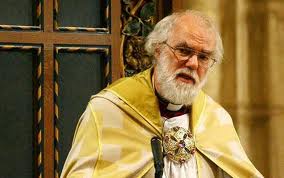 “There is plenty to suggest that younger people, while still statistically deeply unlikely to be churchgoers, don’t have the hostility to faith that one might expect, but at least share some sense that there is something here to take seriously – when they have a chance to learn about it.”

I’m not sure why The Archbishop expects that young people would be “hostile” to faith. They may well be indifferent to it or find it faintly quaint and ridiculous, but I don’t think “militant secularism” has seriously pervaded the British School system yet.
But that apart, I actually agree with him that religious education should be taken seriously. We live in a multi-faith world where religion is the main driver of regional conflicts and social unease. It is important that young people enter the adult world equipped with knowledge of the foundational myths and dogmas of the major religions, in order that they can deal responsibly and sensitively to these issues when they arise and understand the socio-political makeup of the society around them. What they don’t need is their “moral and spiritual” development being tied to these classes, as religion shouldn’t have a monopoly on morality, but as part of a rounded education R.E has a place when taught in a historical and social context.


William’s second statement of interest is his assertion that the ultimate test of the Christian religion is not whether it is useful or beneficial but whether or not the resurrection of Jesus Christ actually happened.

“When all’s said and done about the newly acknowledged social value of religion, we mustn’t forget that what we ultimately have to speak about isn’t this but God – the God who raised Jesus and, as St Paul repeatedly says, will raise us also with him,”

Personally I’m glad that the Church is prepared to offer this hostage to fortune. If the relevance of religion is not that it promotes social welfare or charity, straightforward humanist values that do not require faith at all, but that its central claims to the existence of supernatural events and forces need to be actually true we can finally ditch all of the “sophisticated” theology and tortured apologetics and point to the evidence. No it isn’t true: prayer doesn’t work, genuinely dead people do not resurrect, miracles that are anything other than coincidences do not happen and there is no reason to expect they ever will or ever have.
Whilst finding an archaeological disproof of the resurrection is unlikely (even assuming a historical Jesus existed in the first place) we don’t need to actually falsify the claim that it really happened to work on the reasonable assumption that it didn’t. So thanks for that Dr Williams.
Posted by Steve Bowen on Tuesday, April 10, 2012 No comments:

Thinking and Reasoning Skills Level 2 Award
An inspiring new qualification
With enjoyable and engaging content, Thinking and Reasoning skills provides key skills for life and learning, and allows different kinds of students to achieve success.
With its inspiring mix of reasoning skills and broader problem-solving skills, this exciting new qualification gives students the opportunity to develop thinking in its fullest sense.

What skills does the course include?
A. Critical Thinking Skills

How is the qualification assessed?

Are "Street Pastors" the right people for this?

I watched an episode of BBC 2’s Chaplains:Angels of Mersey which concentrated on a the growing phenomenon of Street Pastors an interdenominational Christian organisation that patrols urban centres late at night ministering to the late night drinkers and young clubbers who can be found staggering around in various states of incapacity and inebriation. I have been vaguely aware of this group as they operate in my home town and on the face of it they are providing a valuable and welcome service to vulnerable young adults, along with lessening the effects of anti-social behaviour. Indeed they often have close associations with the police, who welcome their presence and claim that crime is often reduced as a result of their work. The organisation itself claims that its mission is “engaging with people on the streets to care, listen and dialogue” and is not intended to be seen as an opportunity the preach or proselytise. From their website (my emphasis):


"A presence of Street Pastors will earn credibility in the community, so that people know that the Church is there for them in a practical way. The role is not about preaching heaven and hell, but one of listening, caring and helping - working in an unconditional way"

The BBC programme itself was basically a fly on the wall style documentary that made no overt judgment about the people involved on the ground (Liverpool City Centre in this case), but let the actions and comments of the pastors speak for themselves. Now, I maybe more hypersensitive to the mixed motives of Christian “good works” than many people, but it certainly seemed to me that the people filmed had more than a little self delusion about their reasons for being out on the streets. There was definitely a strong evangelical streak in the makeup of some of them and even if they are genuinely concerned with the welfare of the people they engage with, it was clear that promoting Christianity was very high on their agenda. There have already been concerns raised about individual pastors attitudes to GLBT people they meet and I think this is a genuine worry. Commenter, Angela Geeson from the link above relates:


I spoke to a ‘nice’ lady street pastor in training the other day about her view on homosexuality and to my horror she said that her church ‘did not do gay’….. and that homosexuality was ‘wrong’…. and that she was considering helping to teach / preach in high schools… “That one hole is for babies and the other hole is for the toilet………….”

This kind of attitude could be dangerous if communicated to a very drunk and confused gay teenager. Inevitably the “clientele” for the Street Pastors will come from the less mature and most troubled sections of society, and therefore the most vulnerable to manipulation and indoctrination, even if not directly proselytised to at the time.
The thing is, if there is a real need for this kind of activity on the streets, (the police seem at least grateful for it,) and if it is going to continue to expand, some secular checks and balances might be a good idea, if only for the safety of the pastors themselves. It’s one thing to hand out free flip-flops and a bottle of water to a sozzled girl struggling on high heels; it is another to expose yourself to the potentially violent and abusive elements that are also around at that time of night. These pastors are being trained, but the religious zeal is strong in some of them and it’s not impossible that some less than subtle bible thumping could get them into trouble. Many of them genuinely believe that the power of prayer is protecting them from harm, which is exactly the sort of delusion that could see them in serious danger and oblivious of risk.
I don’t object in principle to these groups and I am aware that the criticism could be levelled at secular humanists that no equivalent volunteer group exists from them. But it has to be said that humanists do not have the incentive to advertise for Jesus that the Street Pastors obviously have and which is a stated primary motive for their existence.
It may be time to take this initiative out of purely religious hands and establish a service some other way under the auspices of local councils or police authorities. This shouldn’t stop good people volunteering for genuinely humanitarian reasons and may encourage non-Christians to take part (the Street Pastors only recruit from church members, which reinforces the suspicion that their motives are mixed) providing some balance to a project with desirable effects but suspect intentions.
Posted by Steve Bowen on Tuesday, April 03, 2012 8 comments: