O.K! This is an unashamedly trivial post on a trivial point about the way many genuinely decent religious believers betray their (often unconscious) double standards when it comes to the influence of God in their lives.
I caught an episode of the I.T.V game show Tipping Point in which contestants win money by answering multiple choice questions for tokens which are then played in a giant “Penny Falls” machine. Each token that falls out of the machine being worth £50.

The game is played in two rounds; the first where contestants compete to gain the highest amount of money, and a second jackpot round where the winner plays for a £10,000 token. Overall the game is a good combination of skill, strategy, general knowledge and dumb luck.
On the show I watched one contestant was introduced as a lay preacher and he quite convincingly won the first round. The host congratulated him on getting through to the jackpot round to which the contestant responded that he must have benefited from some “divine intervention”, pointing heavenwards as he did so.
I thought at the time that he was holding something of a hostage to fortune as there was no guarantee that his luck would hold out for the rest of the show and I wondered how he would explain that if it happened, given that he had publicly credited God with his success so far. I must also confess to the rather uncharitable hope that his game would indeed fall apart so that my curiosity could be satisfied.
Well, as things turned out his jackpot round was disastrous; he failed to answer most of his questions (including one in the religion category, ironically) and the tokens he did win refused to fall in his favour in the machine so that although he came out of the game with a reasonable cash prize the £10,000 jackpot eluded him
So what was his reaction? It was priceless: “I guess my brain and luck deserted me,” he said. Well of course it had, but where was his divine intervention? Had God deserted him at the final moment, or decided he had won enough? Maybe Yahweh was narked at being casually associated with the earlier success or just possibly some other god’s noodly appendages were upon him. But that is not really the point of this.
You can of course do a lot of theological hand waving about what a putative god’s role in all this would be for a true believer participating in a game show, but the telling point is this lay preaching contestant’s response: God is credited a hand in his successes but failure is down to random forces and personal inadequacy, which is an all too typical example of the cognitive dissonance of theists generally.
I even doubt whether this was a conscious distinction on the contestant’s part and whether he even connected his two statements at the time (although if he watched the show back I would hope it would strike him the same way it did me) because to exercise rational thought about “divine intervention” exposes believers to awkward questions that sophisticated theologians have conspicuously failed to answer (to anyone’s satisfaction but their own) for millennia.
Posted by Steve Bowen on Wednesday, February 20, 2013 No comments:

Conflict resolution: A difference between Science and Religion

I’m in the process of reading ‘Making Sense of Evolution: The Conceptual Foundations of Evolutionary Biology’ by Massimo Pigliucci and Jonathan Kaplan. This is not a book that I would recommend by the way unless you have at least a college level degree in genetics (I have) or are otherwise well read in the subject as it is very technical in places and assumes a lot of prior knowledge. I bring it up here however because a couple of the early chapters brought home to me clearly the very different ways that science and religion deal with conflicts of ‘doctrine’ between their respective practitioners. 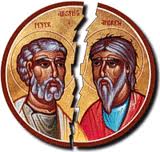 There is near complete consensus amongst biologists that the modern synthesis account of the evolutionary process is a largely correct description of how Darwinian selection, Mendelian genetics and molecular biology combine to allow species to adapt and radiate (need I mention there is no scientific dispute as to whether evolution is actually true?). However, there are differences of opinion on important questions of detail, one of which is the level at which selection actually occurs.
The (probably) majority view is the one most famously articulated by Richard Dawkins that selection acts on genes and that evolution can be said to occur when a particular gene becomes more prevalent in a population over time as a result of selection pressure. Pigliucci and Kaplan, amongst others, point out that selection most obviously happens at the level of individual organisms (it is the trait that is selected for directly) and that the phenotype (the set of physical characteristics) does not always map easily onto a particular gene. Pigliucci is also sympathetic to group selection theories where selection acts upon the fitness of populations rather than individuals or genes.
There is a certain, if limited, parallel here with religion. Practitioners of a particular religion will agree on the main premises; name of deity, lives of prophets, holy scriptures etc. but frequently display disagreement on finer points of theology and practice. Take the early Catholic Church’s struggle with the Trinity, or even the modern Anglican Church’s dilemma over the role of women in the hierarchy, both examples of a heterodoxy of opinion beneath the surface of a common orthodoxy.
The parallel breaks down however in the different ways science and religion deal with the issues. In the case of the Catholic Church, after convening a council of Bishops and establishing the Nicean Creed the Church then went on a mission to brand dissenters as heretics and literally kill off the opposition. The result over centuries was entrenchment of dogma and multiple schisms with, ultimately, many different sects following their own interpretations and although I don’t see the C of  E branding anyone a heretic over women Bishops, I would not be surprised to see breakaway dioceses comprised of the disaffected.
Religion has no choice but to deal with dissent and disagreement in this way, either by enforcing a creed or disintegrating and factionalising. Why? Because there are no empirical facts to be discovered that can inform the arguments. Theological disputes have nothing to fall back on except their scriptures and their traditions both of which are open to interpretation without empirical data to support them
Science on the other hand does not have this problem. For sure, it develops its own orthodoxies and there are conservative elements that defend them and others that challenge them. True, arguments get heated and nasty and sometimes a faction forms and enmities emerge. But, ultimately all scientists know that at some point the argument will yield to hard facts and experimental data, knowledge and understanding will advance and paradigms may change
In the example about levels of selection above the ‘correct’ answer is not immediately clear. Evolution is a simple idea in principle but turns out to be very messy and difficult to quantify in practice, life being what it is and not easily reducible or predictable. My own intuition, for what it’s worth, is that no matter how complex the interaction between organisms and their environments proves to be the final answer will be found in the genome. Although this may be because I am a product of the W.D. Hamilton and Richard Dawkins generation of biologists who first expounded the gene-centric view of evolution. But Pigliucci, Kaplan and their ilk could easily be correct and as long as it isn’t completely intractable the truth will emerge in the observational and experimental data eventually.
Posted by Steve Bowen on Monday, February 04, 2013 No comments: