Why I believe in Father Christmas

I’m a big fan of Santa. This syncretic quasi-religious staple character of Christmas serves a useful purpose both for parents and the young children that are encouraged to believe in him. 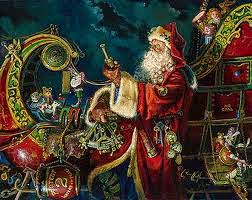 For one thing he can be a proxy for parents and relatives as a source of presents and treats. Children don’t have to know that they are entirely dependent on their families for everything and at least once a year they can rely on something from someone they don’t feel a need to be totally beholden to. Also the extent to which they have been “naughty or nice” can be a good incentive for self-reflection in the run up to Christmas without any real dire consequences following either way (I mean, do any parents ever not give presents from Santa when their kids misbehave?)
But for me the real utility of Santa is at the point where children start to doubt his existence. Most parents eventually observe their children applying a little bit of critical thought to the whole shtick; “How does he fit down the chimney?”, “But, we haven’t got a chimney”, “How does he get to all the children in one night?”, “How come he looks different in every shop with a grotto?”
Ultimately, all children see the absurdity of Santa, but more interestingly most also take longer to let go of the idea altogether and it is common for children to pretend to their parents and younger siblings that they still believe. This is a good exercise in both scepticism and diplomacy; skills to be encouraged in children and adults alike.
It would be better if all children managed to make the logical leap from a non-existent Santa to a non-existent deity but the extent of religious belief belies any pretence of that possibility although this watershed moment at the crux of credulity does inspire some to question the claims of religion sooner or later. But more to the point it is an early object lesson in the tolerance of other people’s cherished delusions.
I have often said that beliefs don’t deserve uncritical respect but one should respect the right of people to hold whatever beliefs they like (note: this does not entail respecting the believer, adults should take epistemic responsibility for what they believe) and the ability to indulge a younger child’s Santa belief or a parents delusion that you still believe is a skill applicable to adult life.
This, apart from the obvious irony, is why I was struck by this story of a Norfolk curate who told primary school children that Father Christmas doesn’t exist.


During the carol service, the curate asked children what they thought was the meaning of Christmas. When a child answered "Father Christmas", she told them he was not real. One parent said on Facebook that Mrs McPhee had "put me off taking my children to church just in case something else gets said".

Rev Margaret McPhee has since apologised to the school for her comment and I am sure she sincerely regrets it. However it does illustrate how glibly people of faith will disabuse a child of its sincerely held belief in one supernatural being while trying to defend the existence of another.
As an atheist but particularly as a humanist I am, more and more, finding myself in contact with children and adults with beliefs in various deities and while I openly state that I do not believe in gods would not dream of telling a young child directly and unasked that Allah or Jesus or Santa weren’t real. It is reasonable though for them to know that not everyone believes the same thing and it would have been enough for the curate to acknowledge that Santa and his elves are important for some people at Christmas before relating the church’s entirely rational position vis-à-vis virgin births, heraldic angels and miraculous stars etc.
This is not the same as answering an honestly asked question. A child who asks directly of an adult whether Santa is real deserves a factual answer as does the child who asks directly about God. However, much as it’s fun to draw equivalences between God and Santa the answer to their respective existence cannot be identical. We know unequivocally that Santa is a fiction and should say so when it’s appropriate while explaining why some people maintain the pretence. God however is a much more slippery concept and when a child asks if God exists then is the perfect time to explain how there are so many ideas about what a god might be that they cannot all be correct and that possibly all are wrong.
This is when the previous experience of letting go of one fantastical figure can help them explore their doubts about another while at the same time negotiating the minefield of living with those who still cling to belief.
Anyway, enough! I still have a stocking to hang and mince pies to put out (must remember a carrot for Rudolph).