Who wants a Templeton then?

I hate to lay into one of Britain’s most popular science presenters, not to mention one of the country's pre-eminent fertility specialists in this way. But Dr Robert Winston is not the ambassador for scientific rationality we might wish him to be.
In this interview with Sam Harris he nails his accomodationist colours firmly to the wall in such a nauseating post-modern way that any claim that he understands the point of the scientific method goes completely out of the same second floor window he presumably uses (pace Isaac Newton) when he leaves for work in the morning.
Take this exchange:

SH: Religious language is, without question, unscientific in its claims for what is true. We have Christians believing in the holy ghost, the resurrection of Jesus and his possible return – these are claims about biology and physics which, from a scientific point of view in the 21st century, should be unsustainable.

RW: You talk as if science is an absolute, and I don't think it is at all. It isn't the truth either, because I don't believe there is such a thing as "the truth". You rail against the ultimate truth of what some people believe – ie religion, God, Jesus, whatever. I don't, because I don't think it makes any more sense than railing against scientific truths. I say "truths" in inverted commas, because truths have a habit of being altered as we develop our knowledge.

Sure scientific truths are subject to change, or more accurately refinement as new evidence presents itself. But that is completely different from religious “truths” inferred from ancient neolithic tomes and and believed to be unchangeable for eternity, whatever the evidence against them.
It’s embarrassing. This is the kind of idiocy we expect from the U.S on a regular basis, but it’s cringe making from one of the U.K’s most prominent scientists. It matters too, because Dr Winston is an influential person, a popular educator in a country where scientific literacy is not all it should be and it gives succour to the “intelligent design” proponents who would redefine science to suit their creationist agenda.
The bizarre thing is, no matter how much respect Dr Winston has for religion (and that’s entirely a matter for him) I find it hard to understand how a scientist of his stature can really believe there is no difference between the “truths” of science and religion. A cynic might think he was angling for a Templeton prize, and if he keeps this drivel up, he might just get one.
Posted by Steve Bowen on Tuesday, April 19, 2011 1 comment:

The Ahmadiyya Muslim Association has launched an ad campaign on U.K buses in an attempt to improve the image of Islam in the country and counter Islamophobia. 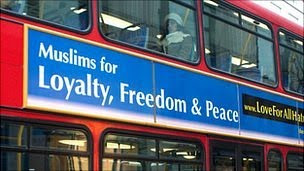 I think this a worthy aim and if it stops a few people from treating Muslims as a stereotype as opposed to individuals within a particular faith community all the better.
But, an even better way to show the world that Islam can stand for Loyalty, Freedom and Peace would be to actively promote and live those virtues. When Muslim groups stand up for the rights of others to examine and critique their beliefs, when they call for the abolition of blasphemy laws in Pakistan and other Muslim states and when they unequivocally denounce the violence perpetrated by extremists in the name of Islam and when they explicitly acknowledge the rule of secular democratic laws above Sharia, then they will win support from more British people of all faiths and none.
Posted by Steve Bowen on Tuesday, April 05, 2011 No comments:

What's their problem with evolution?

An atheist before Darwin could have said, following Hume: "I have no explanation for complex biological design. All I know is that God isn't a good explanation, so we must wait and hope that somebody comes up with a better one." I can't help feeling that such a position, though logically sound, would have left one feeling pretty unsatisfied, and that although atheism might have been logically tenable before Darwin, Darwin made it possible to be an intellectually fulfilled atheist.
-- Richard Dawkins, The Blind Watchmaker (1986)

Why do fundamental Christians dislike the Theory of Evolution by Natural Selection so much? It might be tempting to think that it is because as Dawkins says it is the killer argument against the necessity of God in the creation of life and man in particular.
But as proponents of theistic evolution point out, there is nothing inherent in TOE that negates a role for a god of sorts, albeit an un-falsifiable one. Even belief in Intelligent Design is possible in a ‘god of the gaps’ sort of way, at least until actual real science plugs the gaps.
Of course fundamental, biblical literalists would argue that God already explained how creation happened, so TOE must by definition be wrong (this is why Muslims have a problem with it). But I think there is another reason why they dislike the idea that man in particular evolved and was not a special creation. It is also a reasoning that spills over into less literal Christian’s problem with evolution. Original sin.
For a Christian the only point of Christ’s crucifixion and subsequent resurrection is to show the way to salvation from Adam’s heinous crime of disobedience to God in the Garden of Eden. If there was no garden, no Adam and Eve and no act of disobedience, a simplistic understanding of Original Sin is not possible. You can invent theodicies to cover of course, ascribing God’s intentions to the outcome of evolution as a fallen and imperfect mankind. But this is not the sort of narrative that sits well with the bloody and tortuous scapegoating of a god-man on a cross. Cleansing the world in such a sadistic way of the sins of billions of years of evolution set in train by a deity who planned in advance that man would evolve to be imperfect has theological problems of its own. But Adam created whole with free will and the chutzpah to rebel (with a little goading by the missus) can be squeezed much more neatly into the idea.
Evolution gnaws at the very heart of Christian dogma in a way that almost nothing else does. Except to a literalist a 14 Billion year old universe with a Big Bang at the front end doesn’t present big problems for Christians theologically speaking, but evolution definitely does.
Posted by Steve Bowen on Monday, April 04, 2011 No comments:

Well following my last post (not because of it you understand) I was hoping for a groundswell of Muslim opinion condemning the murders of U.N officials in response to the (idiot) Pastor Terry Jones' burning of one of several million two-a-penny copies of the Qur'an. Waiting... still waiting... still waiting. O.K! It's not going to happen is it?
This is my call out to "moderate" Muslims (I know you're not reading, but indulge me) Give me one good ethical explanation why murdering innocent people in Afghanistan should be justifiable for one book burnt by an arsehole in America. Just one... surely it can't be that difficult? Waiting... still waiting... no?! I didn't think so to be honest. Get out of the dark ages people and be fucking quick about it. Your religion is not sacred to those of us who don't share it and you need to get used to that fact. A book does not equal a life, if you cannot appreciate that basic moral fact, you are as despicable an individual as I can contemplate
Posted by Steve Bowen on Sunday, April 03, 2011 4 comments:

If only this was an April Fool's joke

There has been an outburst of violence in Afghanistan in response to Pastor Terry Jones' burning of a copy of the Qur'an on the 20th March of this year. To be honest, I didn't even know the idiot had followed through with his threat to do this, originally scheduled to be done on the last anniversary of 9/11. But, to be clear, the violence in Afghanistan, which has lead to the death of "at least seven U.N workers" is not his fault.
The Qur'an is a book, just a fucking book. The book he burned was his book, bought and paid for, one of millions printed every year, containing the same words that can be found on the internet (if you can be arsed to read the turgid thing) and no matter how sacred some fanatical muslims want to consider it they have no right to insist that the rest of us consider it anything more than it is. In my opinion it is the lunatic ravings of a deluded and deranged paedophilic despot. You may think otherwise, so what?
Terry Jones is despicable, stupid and I wouldn't give him the time of day but he is not the villain here.
Posted by Steve Bowen on Friday, April 01, 2011 1 comment: