No Dr Williams, we have real issues with you too.

Retiring Archbishop of Canterbury Rowan Williams has suggested that Secularists are using Christianity as a 'surrogate' for Islamic radicals when they criticise Church involvement in politics and public life. The comments were made at a service in Wallington in response to a question from Revd Cookson who asked him about the recent debate over secularism saying:

“Do you think that the real issue for them isn’t necessarily Christianity but actually radical Islam, that it is more of a reaction to radical Islam and we are the surrogate for that.”

To which Dr Williams said:

“I think there is a lot of truth in that. It is the last decade that has seen the great rise in anxious secularism, a real suspicion of religion in public.”

I have some sympathy with this in that I think it is true that the events of 9/11 and the London tube bombings have made people aware that religion is a dangerous force in fanatical hands and reminded the English in particular that the cosy Vicar of Dibley world of Anglicanism is not the only manifestation of religion in this country. But the fact that Rowan’s C of E posse are unlikely to be seen throwing bombs around is not the reason secularists, at least in this country, concentrate on Christianity. It is because Christianity, and Anglicanism in particular, has a political influence disproportionate to the constituency it purports to represent. Al-Quaeda does not have its leaders in the house of lords, but there are twenty-six bishops who comprise the Lords Spiritual as part of the established church in England. They get a big say in the way legislation is framed and moderated purely by reason of having climbed the ranks of this particular religious institution.
I do, as a matter of fact, think the secular elements in Britain ignore Islam more than they should. This is in part because the danger of violent reprisal is not trivial, but it also has a cultural dimension that can leave us open to accusations of racism if not approached properly. That said, Christianity is not just an easy target and a surrogate for disquiet about Islam, it would be the prime focus in any event where issues of legislation clashed with religious thinking. Neither are we, as the Archbishop believes being naïve about religion:

"We are also in a culture where a lot of people simply don’t know how religions work. I sometimes think the problem with a lot of government initiatives is that they assume either that vicars are imams in dog collars or imams are vicars in turbans. [They assume] that there is one way of being religious – either you are a sort of committed fanatic who wants to subvert the whole to your agenda or you are a sort of woolly liberal who can be persuaded who can be persuaded to go along with whatever is happening in society. The Church isn’t either of those things, it is the assembly of Christ’s friends with good news to share.”

Which is just silly: we know that religion is a diverse phenomenon, but all faiths share one thing in common. None of them are true. It doesn’t matter how benign and ecumenical the Anglican Church wants to be, the root rational for their opposition to some types of social reform comes from the same mythos as radical Islam’s and given its privaliged position is a clear and present obstacle. That is why, in the face of pending equality legislation and the Church's vocal opposition, secularists in Britain are concentrating on Christianity.
Posted by Steve Bowen on Monday, March 19, 2012 No comments:

What "Big 'Pharma" learnt from Christianity.

One of the criticisms often laid at the door of “big ‘pharma” is that it attempts to medicalise perfectly natural and benign variations in people’s health and sometimes invent new diseases and conditions in order to expand the market for new drugs, Particularly in the affluent west where we have come to expect optimal health at all times as a virtual human right, it would almost be surprising if the pharmaceutical industry didn’t try to exploit our hypochondria to sell us yet more products we don’t really need. It is after all only a variation on what all producers try to do, which is expand the “universe” of potential customers to market their products to. 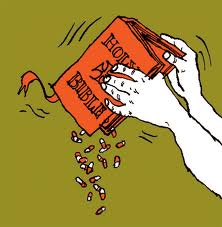 Depending on your opinion of the pharmaceutical industry and capitalism in general you may have a view on the extent to which corporations really do indulge in such manipulation of our collective psyche to maximise their potential sales, however there is one industry that has been doing exactly the same thing for two millennia; Christianity. And I say Christianity specifically as opposed to religion in general because it is Christianity that first sells us the disease, which is original sin and then offers the cure, which is Jesus Christ.
Even the other Abrahamic traditions, Judaism and Islam do not market themselves in quite this way with the emphasis on salvation via one individual product as the panacea for the sins it has itself saddled us with. In fact Christianity’s USP is precisely that God comes to you, via Christ to cure you permanently from your moral afflictions, never mind that you were probably unaware that you were so afflicted in the first place, or would have been if the bible hadn’t told you that you were. It’s marketing genius really when you think about it.
And, just in case you might be tempted to point out that, if you really are so “fallen” and morally sick, why do you not have any symptoms? Well, what about those lustful thoughts, the sex before marriage, the envy of your more successful peers and all of those other (perfectly natural) immoral behaviours you may indulge In ? Of course you need a shot of Jesus, at least once a week to be taken with wine and a cracker.
At least with big ‘pharma, if they invent a condition they are obliged to sell you a product which is proven to alleviate it (if they are going to call a bad mood “depression” the pill has to work in some way). Christianity however offers spiritual homeopathy, not only is the disease bogus, but the “cure” is devoid of substance.
Posted by Steve Bowen on Monday, March 05, 2012 No comments:

A Muslim speaks out

It appears there is at least one Muslim prepared to speak out against the violence over the Qur'an burnings. read this by Abdullah Antepli

These violent reactions of yours really do not make sense on many different fronts. For any Muslim who believes the sacredness of the Quran as God’s final revelation to humanity, that very same Quran condemns and rejects such anarchy in many of her verses and teachings. First of all, the Quran invites us to respect and engage with her divine message more so than the actual physical form of the book that is found between two covers. Respecting a physical copy of Quran could be understandable, but violating its central teachings and principles—for example by killing innocent people—just because someone disrespected or insulted a copy of the Quran is unacceptable, barbaric and reprehensible. No physical copy of a holy scripture, including the Quran, is more sacred than the life of a human being. This is what the Quran and our beloved prophet, whom the Quran came through, teaches us over and over.