Is there something about Islam?

Earlier in August I attended the World Humanist Conference held in Oxford. Among the many interesting sessions and presentations one of the most thought provoking was a panel discussion called “Is there something about Islam?” in which Alom Shaha, Maajid Nawaz, Keenan Malik and Maryam Namazie debated whether Islam is peculiarly prone to violence and fundamentalism.
Keenan Malik, in particular, argued that Islam like any other religion is open to interpretation.


“Jihadi literalists, so-called ‘bridge builders’ like Tariq Ramadan […] and liberals like Irshad Manji all read the same Qur’an. And each reads it differently, finding in it different views about women’s rights, homosexuality, apostasy, free speech and so on. Each picks and chooses the values that they consider to be Islamic.”

This is true of course, but to point out that to be a Muslim does not necessarily mean you will be a radical is a truism that only the paranoid and prejudiced would reject. It is also true that other religions have their extremists and that most religions have at some time or other been used and abused in the service of atrocity, but it is impossible to ignore the frequency and intensity with which Islam is the prime culprit today.
Radicals are also spawned by secular causes; environmentalism, feminism, animal rights, nationalism and racial equality to name a few. Most to some degree have had their share of violent protests, sporadic riots, bombings and death threats but these really are confined to a very small minority of the people who support such causes and a sustained commitment to violent extremism in these cases is rare.
Radical Islam however is building a consistent narrative of violent jihad recruiting and growing to the extent that it can now sustain a well-equipped and effective army in Syria and Iraq.
I.S. may not represent the Islam of the vast majority of Muslims around the world, certainly not the Shia or the Sufis, but they are attracting recruits in droves from Asian Sunni communities in the U.K and Europe despite the horror with which their actions are reported here. It attracts finance from wealthy Muslim countries and, according to a recent report, a 92% approval rating from citizens of Saudi Arabia.
I disagree with Keenan Malik and also blogger Simon Frankel Pratt with whom I had a brief Facebook discussion on the subject. Whilst individuals may have their own routes and reasons to radicalisation they cannot pursue them in isolation, they need a framework and an internally consistent narrative in order to sustain their zeal and justify behaving in ways that in other circumstances would be anathema to them. No other religion in the modern world has the ideology, history, theology and motive to support violence in way that Islam does.
In the first place Islam has always had a strong territorial and political dimension. The traditional history of its early expansion is one of conquest and occupation with the establishment of the faith achieved in a matter of decades following the death of Mohammed. Whether this and the exploits of the first Caliphs, scimitar and Qur’an in hand, are true or not they are written into the Hadith and Sunnah and are a ready justification for modern day jihad. I can think of no other religion that claims to have spread in this way or would want to be associated with forced conversions today even if they happened in the past.
Secondly Islam is socially normative to a high degree. It is not only a religion to be believed it also has to be practiced in ways that can demonstrate that belief. Dietary laws, praying in one direction at specific times of day, fasting and pilgrimage are signals to other Muslims that they are part of a bigger community with obligations to conform. This also makes it easier for other norms such as Hijab to emerge even though they may not be a strict requirement of the religion.
The Qur’an is highly prescriptive. To find a parallel you could look to Leviticus or Deuteronomy in the Bible but the Qur’an is almost entirely comprised of this kind of legalistic theology whereas the Bible drowns it out in history and myth then arguably dispenses with it entirely in the New Testament. Muslims are taught to see their scriptures as authoritative and the Sharia legal system is based entirely on the Qur’an and Hadith. It is still possible to pick and choose liberal interpretations but much harder to refute the conservative ones
The principle schism in Islam between Sunni and Shia runs very deep and traditionally stems from a dispute over who should have succeeded Mohammed as leader of the faith. It is no accident that the main victims of I.S. are Shia Muslims, heresy being a worse crime than being of another religion entirely. Islam is not uniquely but nevertheless very well primed for the “othering” of heretics and apostates and dehumanising potential enemies.
Simon Frankel Pratt kindly pointed me to an article by Clark McCauleya* & Sophia Moskalenkoa called Mechanisms of Political Radicalization: Pathways Toward Terrorism which is worth a read as it explores the mechanisms by which individuals may become radicalised in diverse situations. They call this the “pyramid model”


”From base to apex, higher levels of the pyramid are associated with decreased numbers but increased radicalization of beliefs, feelings, and behaviors. Thus one way of thinking about radicalization is that it is the gradient that distinguishes terrorists from their base of sympathizers. How do individuals move from the base to the extremes of terrorist violence at the apex?”

a path that is summarised in the table below. 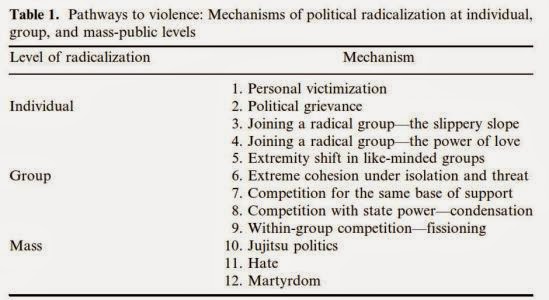 But in my view Islam short circuits this process by providing a ready-made ladder to the apex and a fast-track means of fulfilment for the wannabe radical. The emphasis on martyrdom, the supra-nationalism, the prescriptivism and the historical justification all make Islam a potent draw for those who would find political cause or personal glory in its name. Islamism is a thing. It is a political movement with substantial theological support and history on its side. Although the vast majority of believers may wish to reject it conservative Islam is shifting the perceptions of what it is to be a Muslim towards its own narrow interpretation, often aided and abetted by western media portrayals of Islam in precisely this way.
Liberal Islam is also a thing so there doesn’t have to be “something about Islam” but for now the conservative view has the platform and the charisma to attract young Muslims who are otherwise disaffected and, more than other causes or other faiths, the doctrines to retain them.
Posted by Steve Bowen on Friday, August 29, 2014 No comments: