Not just culture: It's religion!

It is a fact of the world that there exists a diversity in cultural practices surrounding all sorts of human behaviour; from how food is prepared and shared, to dress styles and rites of passage and one of the pleasures of travelling, either in reality or vicariously via television documentaries is being exposed to this diversity. It is also true that, in the main, such diversity adds colour and richness to the world and for that reason alone is worth preserving, at least as long as the people practicing it want things that way.
However, not all cultural practices are so benign that they can be experienced or enjoyed with total equanimity. 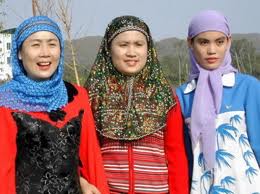 I’ve been following Chinese chef Ken Hom’s Exploring China: A Culinary Adventure the latest episode of which saw him in Yunnan province, Southwest China sampling the food of the ”minorities”. In particular Ken and his co-traveller Ching-He Huang were attending a celebratory meal with the local Hui Muslims. This Chinese minority group follow the same dietary laws as Muslims the world over and appear to share their misogyny and patriarchal pretensions too.
Ching’s reaction to be being shuffled off to a separate party with the rest of the women was at first one of mild but obvious surprise and offence, but then in the voice over, she excuses it as “their culture”, and no further reference to the implied status of the women is made, either within the context of the meal, or in the direct to camera portions of the program.
Immediately prior to this Ken and Ching were witness to the Halal slaughter of a goat, to be roasted for the meal. In this ritual preparation of food the animal is blessed in the name of Allah, its jugular slit and so bled to death. Now, I am aware that the jury is still out on whether this is a more or less humane way to slaughter meat animals than the western preference for stunning first with a captive bolt. The scientific evidence is conflicted at best. However the program managed to gloss over the controversial aspects, mainly by making the process appear much quicker than it is and not showing the reflexive struggle that the dying animal always displays when killed this way.
When Ching comments to their host that in her culture the blood (which is Haraam according to Islam) would be soaked up with rice and eaten, she was responded to with a terse “No!”
Of course people can choose what they are prepared to eat, but the finality of their hosts reaction brooked of no further conversation on even the possibility that other culinary options existed.
The reason the program doesn’t question these cultural attitudes is because, well, it’s not just cultural: Its religious. Almost any other quirk of indigenous or local behaviour could be politely commented on and compared and contrasted with what obtained elsewhere in the world. One could even imagine having a civilised debate about which if any of such practices were ‘better’ however that was defined. But once culture and religion become conflated conversation stops and even comment is seen as inappropriate.
It’s bad enough when this stops us criticising sexual segregation, or debating the merits of animal rights. But religion provides cover for the most egregious of cultural practices and discrimination from denying women’s rights to education or franchise, to genital mutilation, forced marriage, violent exorcism of ‘possessed children’ and stonings.
In twenty-first century Britain we should not let program makers get away with portraying discrimination as quaint and culturally relative without at least passing comment on whether this should be appropriate to any culture anywhere today. And we should not be shy of exposing the role religion plays in perpetuating such violations of basic human rights.
Posted by Steve Bowen on Tuesday, August 21, 2012 No comments: 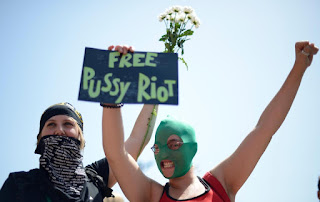 I'm going to assume, in the interests of my sanity and some brevity, that I do not need to give a detailed backstory on the events that lead the russian punk band, Pussy Riot, into court on charges of hooliganism for a protest staged in Moscow's main cathedral against the Orthodox Church's support for Vladimir Putin.
Today Maria Alyokhina, Nadezhda Tolokonnikova, and Yekaterina Samutsevich were sentenced to two years in prison.
Now anyone with an ounce of sense knows the real reason why this totally inappropriate sentence for an act of mild disrespect of “sacred space” was handed down; it is entirely political and intended to show that criticism of Putin's new autocracy will not be tolerated. So far, so much real politique. But the true injustice here is the abuse of religious indignation for state purposes.
Pussy Riot have been sentenced (ostensibly) for offending the religious sensibilities of Russia's orthodox believers, which is absolutely not the role of any credible democratic government. But it highlights, vividly, why those countries that still manage to maintain a reasonably healthy distance between church and state should be vigorously encouraged to keep it that way.
As soon as a government has the ability to exploit the ultra – sensitive nerves of the religious community to suppress criticism of its own regime what you have is full blown theocracy. This is the lesson for those who would accept that “religious freedom” includes the ability to define what is or is not a suitable forum for dissent. Allow the government to support the “rights” of churches, and particularly established ones, to demand penal retribution for acts of “sacrilege” and you open the door to suppression of free speech.
This is the power catholicism craves in America and the Pope must be creaming his vestments at the thought of this verdict. This is the assumption of privilege that the Anglican Church whines endlessly about losing, and desperately longs to regain. This; this travesty of justice in the name of baseless offences against religious sentiment is what government endorsement of religion leads to. It makes a mockery of any idea of religious tolerance and provides a smokescreen for state suppression of freedom of speech and human rights.
O.K, this is Putin's Russia and why should we expect any better, but it could be here tomorrow and the weak link in our defences is religious privilege and undue respect for the trappings that accompany it; don't grant either if you value free speech.
Posted by Steve Bowen on Friday, August 17, 2012 No comments: