No women Bishops (yet) is really a victory for equality

So this was to be the General Synod that finally approved the ordination of women as Bishops in the Anglican Church, which as we now know, it narrowly failed to do despite majorities in favour among the Bishops and the Clergy. The vote failed to reach the required majority in the Laity where a compromise provision for parishes that wanted to opt out of the authority of a female Bishop was considered insufficient by some.
To me, looking at this divided and deluded organisation from the outside, this seems like a good result for women who truly value equality, even in such an inherently misogynistic environment as the church. 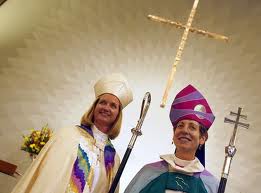 There is no equality in being a female Bishop when the authority it is supposed to confer can be flouted on purely sexist grounds by conservatives and evangelicals who choose not to be bound by it. By pandering to the reactionary and, lets face it, more doctrinally correct faction of the church the Synod was actually in danger of creating second class Bishoprics notionally led by women but in reality likely to be subordinated to ‘real’ Bishops (A.K.A men).
It’s almost impossible to imagine any other modern institution where this kind of situation would occur. What company for example would appoint a female CEO but then tell its employees that if they didn’t like being led by a woman they could report to a male alternative instead? It’s a bizarre concept that only in the La-La land of religion would have any kind of intellectual traction and I can’t understand why women in the church would seek ordination under those circumstances.
Frankly I don’t give a damn if the Church of England ties itself in theological knots and pulls itself to pieces trying to unravel them, but if I was to offer them some advice it would be to accept that ordaining women is the right thing to do in the interest of natural justice, to tell the evangelicals to like it or lump it and move forward without the encumbrance of a reactionary rump who will condemn them even more quickly to social irrelevance.
Also, while they are at it, the Bishops must realise that they can’t expound gender equality with respect to women and at the same time oppose marriage equality. They are not entirely separate issues, as a church that claims to be for social justice in one sphere cannot discriminate in another and be intellectually honest
One way this situation could be resolved is for parliament to remove the churches’ exemption to equality legislation, which considering the C of E is an arm of the establishment it really should not enjoy in the first place. This would force the Anglican Church to normalise itself in respect to other British institutions or disestablish and forego its privileged position in government and public life. Either option would be preferable to the current anachronism.
Posted by Steve Bowen on Wednesday, November 21, 2012 No comments: 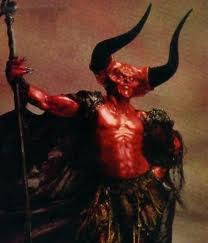 Remaining in a theological state of mind after the previous post and as we are not long past Halloween let’s talk of the Devil.
You will be aware of course of the well known biblical story of how Lucifer, the most beautiful of all of the angels, got a bit above himself and led a factional revolt to put himself in charge, causing God to cast him and his followers down from heaven into the fiery pit of hell from whence, transformed into a priapic scarlet satyr he exacts his revenge by corrupting mankind and leading them from the true path of salvation. However, if this précis is giving you a warm glow of familiarity, it really shouldn’t: no such narrative exists in the Bible.
Rather like the popular concept that saved people go straight to heaven when they die this too is erroneous and even finding evidence for it in the Bible requires more than a little post hoc selective reading.
Starting with Lucifer, this is never used as a proper name in the bible. The Hebrew from which it is translated actually means morning star or possibly shining one and in the context in which it appears (Isaiah 14:12) is now thought to refer to one of the kings of Babylon, (perhaps Nebuchadnezzar II). In the KJV version this was rendered as Lucifer and is capitalised.


How art thou fallen from heaven, O Lucifer, son of the morning! How art thou cut down to the ground, which didst weaken the nations!

However in Isaiah 14:16 it continues…


They that see thee shall narrowly look upon thee, and consider thee, saying, Is this the man that made the earth to tremble, that did shake kingdoms;

which is clearly not describing an angel. Most other translations of the Bible have since dropped the KJV version and reverted to the morning star translation.
Then there is Satan, who first makes a cameo appearance in 1 Chronicles where he incites King David to perform a census of Israel, which for some reason God wasn’t keen on. However he gets a starring role in Job, which although a later book of the bible was probably actually written earlier, and here Satan is fulfilling his proper role as "The Satan", meaning "the adversary". Like Lucifer above Satan is not really a proper name in this context but the title of an angel who’s mission is to observe human sin and act as their accuser.
The idea that Satan is a fallen angel and synonymous with Lucifer and indeed the serpent in the garden of Eden is a later Christian interpretation that goes with their concept of Hell as a place of torture and damnation (a concept that Judaism does not have as Sheol was where everyone went regardless of conduct).
Satan does not become Biblically associated with the Serpent that tempted Eve until The Book of Revelation authored sometime in the first century AD which also names him as the devil for the first time


The great dragon was hurled down—that ancient serpent called the devil, or Satan, who leads the whole world astray. He was hurled to the earth, and his angels with him.(Revelation 12:9)

It is from this that later portrayals (from the 4th Century onwards) have Satan as a devilish figure with horns and hooves, and the erroneous link with Isaiah’s ‘Lucifer’ begins to be made.
So, even if there was any reason to accept the Bible as a reliable guide to reality it is clear that as far as Old Nick is concerned it really says very little to confirm the popular notion of Satan as most people conceive him to be and as the Church would have us believe.
Posted by Steve Bowen on Thursday, November 08, 2012 No comments: